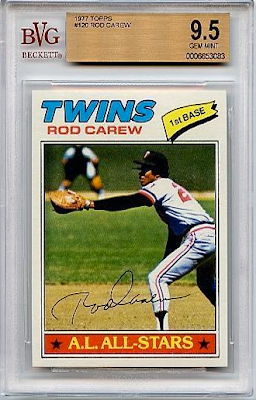 When asked about his single favorite moment of his career. Rod Carew replied “Getting six standing ovations during the course of a ballgame in 1977 in Minnesota.

This card was graded by Beckett in January, 2011. I'm assuming that it was once housed in a PSA capsule because the odds of this card looking that good and never being graded is low. Is it on par with finding a dinosaur bones? Not quite. But I sure wish I had this card in hand to see.
Posted by First Ballot at 12:40 AM No comments: 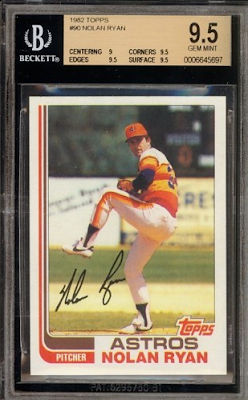 Nolan Ryan throws a one-hitter. His 8th one-hitter of his career at that point. He goes on to throw 5 more one-hitters and still holds the modern-day career record of 13 one-hitters.
Tony Gwynn played centerfield and batted 2nd. He went 0-4 with a K. The lone hit was from Terry Kennedy.
About the Card
1982 Topps. The 2 stripes running down the left side were highly influenced by Activision's video games for the Atari 2600. It doesn't really work on a baseball card because it looks like a hockey stick.
Posted by First Ballot at 12:11 AM No comments: 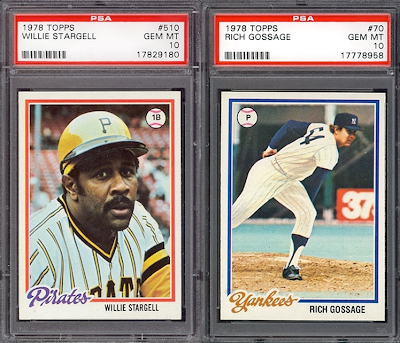 
About the Cards
1978 Topps is a perfect design.  Simple.
Rich Gossage does not have a card appearing in a Pittsburgh Pirates uniform. Prior to 1981’s “Traded” series concept when a star player signed with a new team while Topps was headed to press they invariably air brushed the new uniform on. It always looked bad.
Furthermore, that isn’t Yankee Stadium in the back.
A contemplative “Pop” looks into the distance wondering what might have been had he been healthy in 1977. 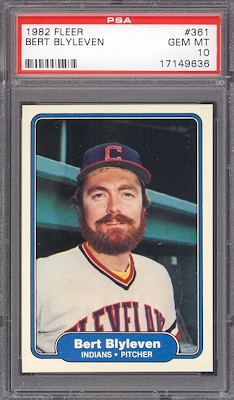 History will show that Bert Blyleven was inducted in the HOF in 2011. However, he should have been inducted in 1998. Most likely the last player to play in the 1970s to make it to the Hall.


Many have blamed the BBWAA for being 'morality police' but the players need to take the full blame here.
The MLB Players Association took every measure to never have testing. Which leads you to believe the majority of them were 'juiced'. They apparently chose money over honor.


1982 Fleer is a very dull design. Is this a baseball card or an ID card? Noted for horrendous photography and even worse production of those horrendous photos. Leave it to the under appreciated Bert Blyleven to get a decent card from this set.
Posted by First Ballot at 1:05 AM No comments: 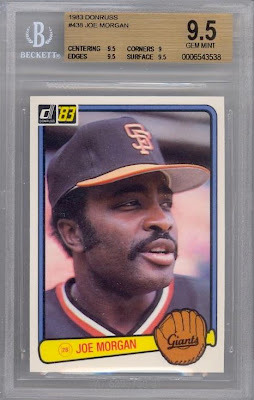 If Joe Morgan hadn’t played a day in the 1980s he still had a HOF career but as with these immortals of the game – Joe Morgan was actually a highly productive player at the age of 38.

1982 was virtually a renaissance season for him - not quite his insane mid-seventies production but a more than respectable .838 OPS.
Giants’ manager Frank Robinson batted Joe Morgan second behind Chili Davis, which was a questionable decision considering Joe was a superior lead off hitter. However, for whatever reason, Joe thrived.  His 5.1 WAR ranked him 12th among players who received votes for the MVP award.
About The Card
1983 Donruss. A Wiffle Ball bat & youth size glove!? I understand baseball cards are a hobby aimed at kids but this is Major League Baseball. Donruss was still just getting the hang of what it was to be a baseball card maker.
Posted by First Ballot at 11:14 PM No comments: