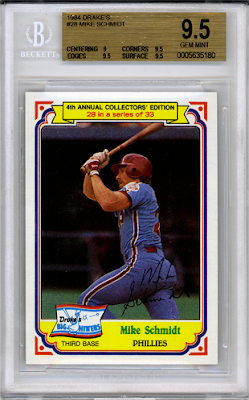 Mike Schmidt comes to the plate in the bottom of the ninth with the score tied at 3.
There are 2 outs and the winning run is on second base.
On the day, Schmidt is 0 – 4 with 4 strike outs…on 12 pitches.
On the first pitch from Jeff Reardon – Schmidt hits a 2 run home run to win the game.
About the Card
Food issue cards! 1984 Drake’s Big Hitters came in mini boxed sets and 500 ct. vending boxes. I’m not sure if this particular series was also distributed into Drake’s cakes products but most likely were. I remember buying Devil Dogs or Ring Dings to get cards so I’ll have to do research on that.
Drake’s defined a “Big Hitter” as 'a clutch player' whom ‘consistently produces that key hit’.
In 1983, Mike Schmidt batted .281 in Late & Close situations.
Late & Close are PA in the 7th or later with the batting team tied, ahead by one, or the tying run at least on deck.
Posted by First Ballot at 8:46 PM No comments: 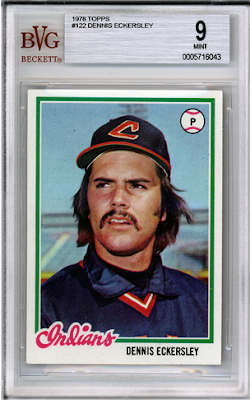 In 1977, the Red Sox finished 2.5 games behind the Yankees. In November, they signed Mike Torrez away from the Yankees. In December, GM Haywood Sullivan traded their ace and future Hall of Famer Fergie Jenkins to the Rangers because Don Zimmer, the Red Sox manager, didn’t like him.[1]

But in order to win the eastern division they would need a true front line starter and not just a ‘scoreboard’ pitcher in Torrez.  On March 30, 1978 they traded for Cleveland Indians’ 23 year-old ace Dennis Eckersely.
From June 21 – July 3, 1978 Dennis Eckersley face the Yankees THREE consecutive starts.
He won all 3 starts with a combined line of 24 IP, allowing 23 Hits, 8 ER, 6 BB, 19 Ks, 3.00 era including holding Reggie Jackson to 2 -11 with just 1 run, 1 walk & 4 ks.
After the July 3rd win "Eck" had buried the Yankees 9 games back.
About the Card
1978 Topps is perfectly simple.   A classic design.
When it comes to graded cards PSA (Professional Sports Authenticator) dominates the vintage market but I prefer Beckett Grading Services.
Their vintage grading division is titled Beckett Vintage Grading and subjectively speaking slightly more stringent.
Aside from the BVG moniker the slab itself is the same as a BGS slab although it doesn't feature sub grades. A practice I find to be a questionable mistake.
If you're looking to purchase or grade vintage cards for resell value you have to go with PSA. Their registry competitions have given PSA a major premium over BVG.
If you're looking for the best protection - Beckett slabs are superior. 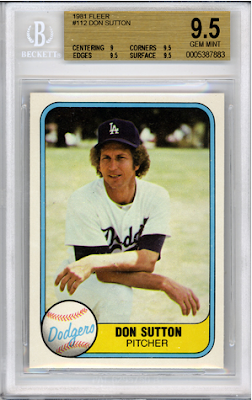 Prior to advances in high-speed photography most baseball card photographs consisted of poses.  One of the most common was the ‘arms folded on bended knee’. This was the least artistic of the poses because it doesn’t resemble any movement you would see in the game of baseball.

Fleer, which fought for 5 years in the courts to produce a baseball card set, decided to employ precisely the same type of poses.  Which once again showed that Fleer was only interested in selling their dubble bubble gum more than bringing innovation to a growing baseball card market.
The 1981 Fleer design would best be summed up as basic.
Posted by First Ballot at 3:04 PM No comments:

1990 Leaf...Leaves are falling all around 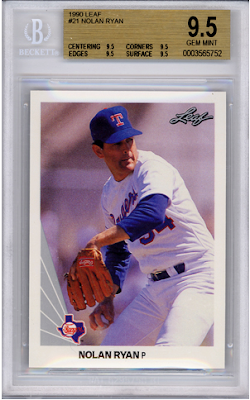 In 1990, after the success of Upper Deck’s inaugural set, Donruss decided to revive the Leaf name to produce an upscale set.

1990 Leaf was the first premium set produced by an existing manufacturer signaling the dramatic change the hobby would undertake after Upper Deck debuted.
In contrast to their heavy border designed Donruss sets, 1990 Leaf was just a simple white border and a silver design in the left hand corner.
The specifics of the production run weren’t made available but its generally believed that Leaf was the lowest produced set of 1990.
To this day, it’s considered a landmark set and still very popular.
About the Card
Of the cards that get submitted to Beckett Grading Services - 1990 Leaf grades out gem roughly 8% of the time. That's a good indication that this is a tough set to get a gem on.  In my handling of this set I find that edges are your primary concern. You don’t want more than one edge to be rough and most of the time all the edges are rough.
Posted by First Ballot at 10:43 PM No comments: 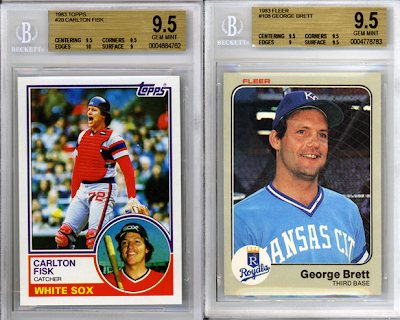 In this side-by-side base card comparison of 1983 Topps & 1983 Fleer you can see why Topps was still considered the only card worth collecting.
Fleer’s one cool move was to use the actual team logo for the team name, which hadn’t been seen on a card since 1965 Topps. But what’s up with the color on the borders? It’s somewhere between fog & granite on the Solar Graphic Window Advertising & Design Color chart.
Although a great improvement over the 1982 Fleer set, this design still was mundane even by early 80s standards.
The Topps design was bold and colorful. It sported two photos & had several shapes used in the design. It was spaced nicely as well.
As for the players – George Brett & Carlton Fisk both had very solid seasons. Brett led the league in Slugging & OPS. Fisk had one of his best seasons at the age of 35. He finished 3rd in the MVP voting by leading the White Sox to a western division championship.
About the Cards
These gems are hard to come by. First, you don’t see them available that often and secondly both sets are tough gems.
I collect and prefer BGS slabs because they are built to last & you can’t get better protection.
Posted by First Ballot at 10:50 PM No comments: 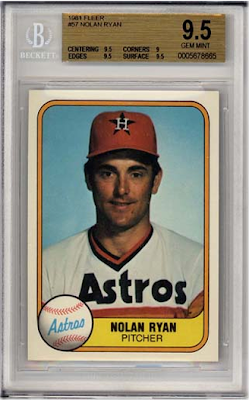 
In an out of court settlement Topps prohibited Fleer from effectively producing any licensed player cards for the next 17 years.
In 1975, Fleer, led by Gilbert Barclay Mustin, the grandson of Frank Fleer, who founded Fleer in Philadelphia in the 1885, began a long antitrust case against Topps. The suit alleged that Topps and the MLBPA used exclusive five-year contracts for the cards to freeze out competition. Fleer won in Federal District Court in 1980 and began offering the player cards with its Dubble Bubble gum in 1981.
When Fleer won, Donruss took advantage of the relaxed regulations, and rushed into production their own set. 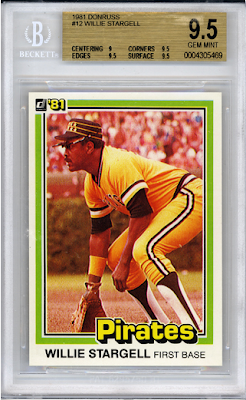 But Topps appealed successfully in August of 1981. The U.S. Court of Appeals ruled that there wasn’t an illegal restraint of trade solely because cards could be produced for minor league players.
In 1982, Fleer found a loophole in Topps’ contracts. Players were restricted from appearing on any other brand card packaged either alone or with candy. Fleer maintained the contract said nothing about cards packaged with something else. They then replaced the gum with MLB team stickers. More lawsuits ensued.
In 1983, Fleer and Topps settled out of court; Fleer could continue to sell cards, but not with gum.
Either way, hobbyists suddenly had three choices and Topps had a rival.
You would think that the inaugural set that you fought years to have the privilege to produce would be something stunning.
But instead Fleer was more interested in finding a way to sell more gum than making a great baseball card.
Posted by First Ballot at 4:15 PM No comments: