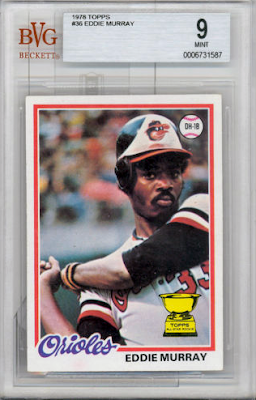 Eddie Murray falls into my category of under appreciated superstars. He was only one of eight men to play 3,000 or more games. The other seven are legendary players but Eddie is hardly mentioned with the likes of Cobb, Aaron, Rose, Musial, Henderson, Yastrzemski & his teammate for seven seasons Cal Ripken. Truly remarkable accomplishment.

He was so under appreciated that he should have been on the 1977 Topps Rookie Infielders #477 card but the slugger lost out that assignment to slap hitting scrub Orlando Gonzalez.

This oversight left him with his own rookie card for 1978. Which is a rarity unto itself for the era.

In another moment of being under appreciated - even though he won the AL Rookie of The Year he had to make the Topps All-Star Rookie cup at DH (the first and only time that has happened) because Doug Ault beat him out at first base.

Eddie was primarily a DH in 1977 because Lee May took more games at first but in essence it was a 1B/DH platoon between the two & the both produced.

1978 Topps is a simple design. Classic white borders with pennant script for the team name. The design has you focus on the photograph and steps out of the way.

Pictured is a BVG 9 'mint' example. Very strong centering. It's at auction right now with a starting bid a $275. It's certainly worth that but I doubt it was get any bids with that starting point.
If this was a .99 cent auction I think you could fetch $330 with most bidders looking to cross it over to a PSA 10.

One of my crazy hobby side projects is to obtain a PSA 9 or BVG 9 or better copies of this set.
This would be the most expensive card in terms of book value but when you get into PSA registry wars - prices for even the likes of Doug Ault can be outrageous.

Editor's Note
As predicted the card did not sell at an opening bid of $275 - It has been re listed with starting bid of $225. I'll predict once again that this opening bid will garner no action whatsoever.
Posted by First Ballot at 7:49 PM 1 comment:

Ron Santo: "This Is My Hall of Fame!" 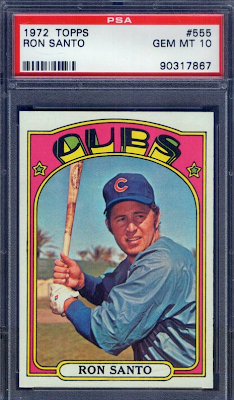 Ron Santo is now a Hall of Fame player. I've never seen him play but I always knew the name. In that regard he is famous but just looking at the stats this is a dubious distinction bestowed upon a very solid ball player. What's wrong with being just a solid ball player? Perennial All-Star? Perennial MVP Candidate? Wasn't that part of his job - to produce? Why couldn't people be content with Ron having his uniform number retired?


Well, the Hall of Fame is a business and they constantly need two things to happen. They need players and they need controversial issues. Otherwise, why would you be discussing one person's merits over another. However, the Ron Santo enshrinement is bad timing. First of all, during his entire life he was denied induction, rightfully so, by the writer's AND the veterans committee! Now, in comes a third vote process the Golden Era Committee and kaboom - instant Hall of Famer.


How horrible to think that Ron Santo's best career move was to die? How misguided that this group of 16 voters think that somehow Ron will get wind of this information? It's more insulting than honoring.


But the greater problem it develops, is that it gives hope to players, that they too, may get a key to the kingdom from the Golden Era Committee somewhere down the line.


According to Bill James' HOF test where a likely HOF scores 100/50. Ron Santo waltzes in with 88/41. Is that the worse election ever? No, it's not, but it's without a doubt lowering the bar....again.


Let me put this another way. If you added the 15 votes he got from the Golden Era Committee members to the 1998 Ballot the year Ron got his most votes he still would have fell 136 votes short of election.


Here at First Ballot we accept the reality that he is in and we will now rectify the "HOF Class of 1980" to reflect that's when Ron Santo got in along side Al Kaline & Orlando Cepeda.


About the Card
I'm not a fan of this design. Never have been. It hasn't held up over time.

Posted by First Ballot at 3:02 AM No comments: