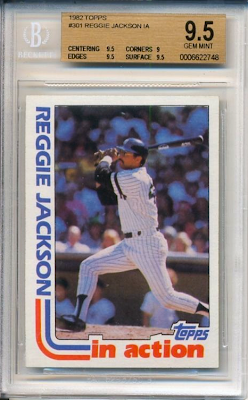 Reggie signed a 4-year deal with the Angels in late January after Topps had gone to the presses in November.  Reggie would be featured as an Angel in the traded set later in the year.

Don Baylor said during Spring Training “Reggie’s Mr. October. Now all we have to do is get him that far.” [1]
They made it there with Reggie leading the way with a league leading 39 Home Runs. The Angels fell in 5 games to the Milwaukee Brewers.
About The Card
In 1982, Topps made three adjustments to keep pace and stay ahead of the new card companies.
First, Topps expanded their set to 792 cards. They did this by eliminating the 66 Double Print card practice.
(The Double Print practice was due to the way the printing machine was set up from 1978 -1980.)
Instead of the Double Print cards three subsets were added. The three subsets were AL All-Stars, NL All-Stars and ‘in action’ cards.
It marked the first time since 1974 and 1972 respectively that these subsets appeared but the reason they had to add these cards is because Donruss was “Featuring Extra Cards Of Star Players.”
The only thing this subset kept from 1972 was the name. The design is more or less the same as the '82 base set. I like that the bottom border is crooked but it comes at the expense that the title in not aligned with the stripe.
Note
Posted by First Ballot at 6:08 PM No comments: 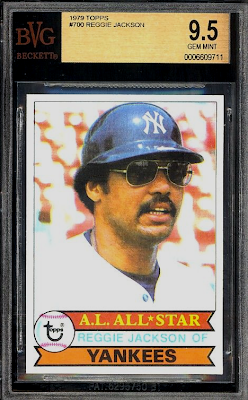 Today, a box sells for $375.00
In 1979, Topps had record sales of nearly $74 million. [1]
Factoring in rack and cello boxes that would mean at least 8 million boxes sold.
In 1979, the brightest star in the MLB galaxy was Reggie Jackson. Playing in just 131 games was once again immensely productive posting an OPS+ of 150, that ranked 5th in the AL.
About The Card
Using a banner instead of a straight block text it’s a slight variation on the 1976 design.
The other difference is that for the first time Topps put their logo on the front left hand corner. I believe this was done because Fleer had been battling Topps in court since 1975 and perhaps by 1979 they were sensing the monopoly would be coming to an end.
The set is known primarily for housing Ozzie Smith’s rookie card but this Reggie Jackson card is timeless. Sun beating down on shiny helmet. Aviator sunglasses. Afro. Mustache. And card number 700.
I much preferred when they put the ALL*STAR banner on the card instead of when they made it a separate card.
This incredible slab is listed at $250 at Pristine Paper. That's not an outrageous sum in context but I would guess at auction it would fetch about $125
Note 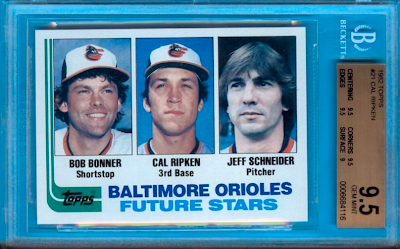 Topps touting Cal Ripken as a 'Future Star' turned out to be an understatement. For Bobby Bonner & Jeff Schneider it was an incredible overstatement. Ripken is labeled as 3rd Base but he actually was a 3B/SS.
On July 9, 1982 Earl Weaver shifted Cal to shortstop for good. It wasn’t until July 16, 1996 that he played third base again.
About The Card
Ripken really stands alone in many respects so it’s unfortunate that he had to share his rookie card with two players that were completely nondescript. That's one of the reasons that his 1982 Topps Traded card is valued higher than the regular issue plus the perception that the traded set is scarcer. However, there is no evidence to suggest that’s the case.
This slab will set you back anywhere between $125 - $175 on auctions. It's well worth the investment. It's a lot of fun buying some 1982 Topps wax to bust yourself & find your own gem copy but you'll most likely end up spending the same amount of money.
Posted by First Ballot at 11:36 PM No comments: 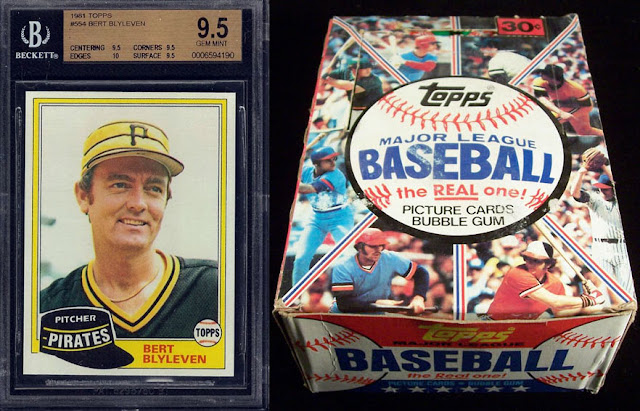 Due to two new rivals, Topps billed itself as “the REAL one!”. The branding strategy that implied that Donruss and Fleer cards were fake didn’t work as intended. The fundamental psyche of a collector is that you’re always on the look out for something new. The next five years total sales for all three companies would grow dramatically.
Bert Blyleven was traded (again) in December 1980 to another perennially also-ran Cleveland Indians.  This is the reason why he is featured as a Pirate. However, this would be corrected later that year in the return of the traded set.
In the strike shortened season, Bert has one of his banner years for a yet another terribly mediocre team. The 1981 Cleveland Indians team hit 39 home runs in 103 games. Perspective? Mike Schmidt had 31.
From April 18 – May 22, Bert threw 6 consecutive complete game wins. The first and only time he had such a streak.
About The Card
The 1981 design work really well for the Pirates because their team colors were incorporated in both the team cap and border. I can’t think of one instance where I was searching for or ever asked about a Bert Blyleven card. I’m not trying to demean his enshrinement. He deserves it but he has to be one of the least popular players of his era.
Update May 17, 2011
This slab sold for $23.23 from Perfect-Score at auction on eBay with a starting bid of $9.99. It only garnered 2 bids. Once again proving the very little hobby support Bert Blyleven receives.

Posted by First Ballot at 11:47 AM No comments: