I love the inference that Chipper Jones belongs in this group of players. As you can see the
slash line had to be dramatically lowered to accommodate Chipper's inclusion. This is not to say Chipper isn't a Hall of Famer in his own right but we are talking about players whom are at the extreme elite hitter level. The average slash of these four players are .339/.455/.628 over a career
that spans 20 seasons!

In Chipper's defense he played in an era with an international talent pool with specialized pitcher's throwing in the mid-90s. 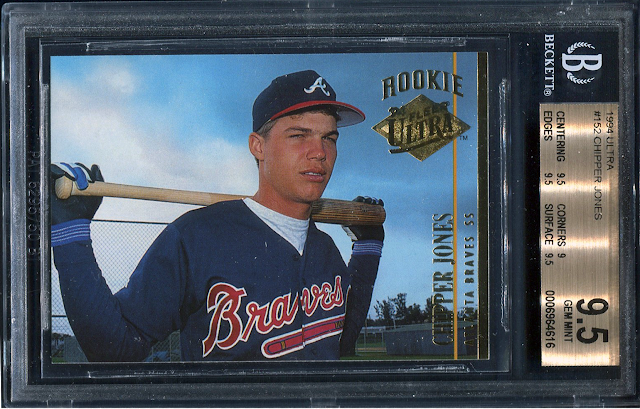 I love the 1994 Ultra set design but when it came to the horizontal cards they really screwed up by not putting the player's name across the bottom. A very lazy artistic choice. With the strike looming and then taking place during 1994, baseball cards became a secondary thought. 1994 marks the end of the high water mark in baseball cards. With the pack prices inflated and literally hundreds of products to chose from the market crushed under its own weight.